How to Hack Your Habits

In a previous post, I talked about how limiting beliefs and bad habits can hold you back from freelancing success.

In today's post, I will introduce you to the anatomy of a habit--that is how habits actually work, and I will discuss how you can use your new-found understanding of habits to hack your habits and change your life.

The Anatomy of a Habit

Charles Duhigg's excellent book, The Power of Habit, boils a habit down to a simple 3-step process: Cue-Routine-Reward. The cue triggers the performance of the routine and the resulting reward reinforces the behavior, thus creating a Habit Loop.

Over time, repeated performance of the Habit Loop leads to the creation of powerful cravings associated with the Reward, so that the habit becomes essentially hardwired in the brain. 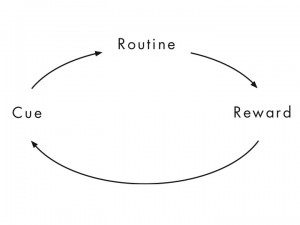 Let's see how this works in practice...

One of my own bad habits is procrastination. I have discovered that when I feel anxiety brought on by uncertainty about how to proceed on a certain task, I will procrastinate by reading the news. The reward I obtain by performing my news-reading routine is a temporary distraction from my anxiety.

How can we rid ourselves of bad habits?

It turns out (again as detailed in The Power of Habit) that you can't actually get rid of a bad habit--but you can change it to a good habit. To transform a habit, the cue and reward of the Cue-Routine-Reward Habit Loop will remain unchanged, but the routine performed gets replaced.

To change my procrastination habit, I am going to try to replace my news-reading routine with a planning routine. When I feel uncertainty about how to proceed on a task (the cue), I will relieve my anxiety (the reward) by coming up with a plan to move forward (new routine). Instead of merely distracting myself from my anxiety, planning will actually relieve the anxiety by providing a greater sense of clarity about next steps.

A word of Encouragement

We all have bad habits we've developed over the course of our lives. It's a very human characteristic, so don't beat yourself up about it. Instead, identify how you can change your habits to healthier habits and come up with a plan to do it.

I'll let you know how my habit transformation journey goes! In the comments below, how about letting us know what kind of habits you would like to change?